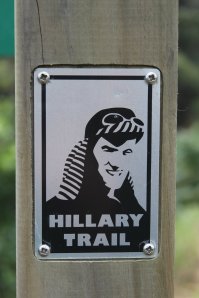 It’s 77 kms long with over 3,200 metres of ascent over it’s length. It’s a rough, tough run and I’ve done it 3 times before. So why would I set off alone in the middle of the night to take on the Hillary Trail again? Simple…. nobody has ever run its entire length solo and unsupported before, and for the competitive streak that still lingers in me that’s like a red flag to a bull. Let’s make no mistake, this is simply for the ‘glory’ or as some might prefer to see it, for the ego. No matter, I’ve always relished a challenge and the idea of knocking off another trail running first is irresistible. I set off at 4am on Weds 3rd August and hope to be through before dusk falls. What will be the hardest part? No doubt about that – it will be running past the Piha Cafe and forsaking a lovely long black coffee. For as this is an attempt to go solo and unsupported, that would have to be breaking the rules!

My progress can be monitored via my SPOT page (bear in mind location signals can’t be sent from areas of dense bush so the tracking signal will be intermittent particularly over the first half of the run). I will also attempt to post updates as I go via Facebook and Twitter.

3 Responses to A First Attempt