All for one, One for all

Friends - the magic ingredient that makes trail running so special!

For some time now I’ve been trying to find the right words to sum up the very special camaraderie that exists amongst us trail runners. But the right words have been hard to find. Then just today a running buddy, the very big-hearted Brendan Moore, sent me something he’d written and it expressed my own thoughts and feelings so perfectly that I have decided to share it in its entirety, completely unedited. This is what he had to say:

I came to trail running just less than a year ago, 22nd May 2011, at the Xterra Series race at Riverhead Forest. Sure, I’d done a few ‘runs on trails’ before, but I was a triathlete (and still am I should add) and the runs I’d done were just training runs that happened to be on trails. One in particular stood out though – having gone down to Taupo to support some friends doing Ironman in March, I took myself off on the Friday evening for a run along the Waikato, past Huka Falls, and then on the way back I spotted a ‘path less travelled’; not the way I’d come, but a different path, heading up into the forest above the river. I decided to explore, and found myself in a different world, of bush and mud and fallen trees, ups and downs and narrow tracks that had slipped away, dropping down to cascading streams. Suddenly my run had changed- it wasn’t about the running anymore, it was about the experience, the environment, the solitude. I loved it! I remembered a friend talking about the Xterra Series and the Kepler Challenge, and decided to enter and set some goals.

Fast forward a year, and I’ve completed both the Xterra Series, moving up from mid to super-long races, and Kepler, and done some pretty epic runs along the way, so hopefully now I can call myself a ‘trail runner’. I’ve met some great people and made some amazing friends along the way, and that’s really what this is all about. I’ve found that when you’re out there in some of the ‘wilder’ parts of Auckland (no, not K Road, I mean the less visited parts of the Waitakeres and Hunuas) with your running pals, you chat and you laugh, and you find out more about each other, and make friends as you would in any social situation. But there’s something more going on behind the scenes, something deeper.

Having come to NZ from the UK four years ago, making new friends has been an important part of settling into a new life, and I’ve been very lucky to have found a great group of people through work, hobbies, interests and friends of friends. The friends I’ve made on the trails though have been a little different. Maybe it’s the ‘out there’ factor of the environment we find ourselves together in, or the fact that we’re all mad enough to put ourselves through some pretty gruelling situations and we help each other through it. Maybe it’s the fact then when you are on some of those remote tracks you know that if something goes wrong, you’ll be depending on those people, and they’ll be depending on you.

For me though it goes further than that. I’ve not had to test my theory fortunately, so I could be wrong but I don’t think I am. You see, I get a feeling that in the space of just that short year of trail running I’ve found a whole new circle of friends, most of whom I rarely, if ever, see outside the trail runs, but if I was in trouble, if the shit hit the fan and I really needed someone, would do all they could to help me. For sure, not all of them might be able to on any particular occasion, but I have absolutely no doubt that if I put out the call, several people would put their hands up and ask what they could do to help. And they wouldn’t do it because they felt they had to, they’d do it because of the bonds we’ve formed out there running together on the trails.

And I think that’s pretty special! It’s one of the things that makes trail running such a great sport, in fact for me it’s just the absolute icing on the cake. So thank you to all my new friends, and all the ones I’m sure I’m going to make along the way- you’ve made me feel part of an incredible community!

(PS: A couple of weeks ago, I was lucky enough to be handed the opportunity to help out a friend in need, who was suffering at the end of a very tough run. What he didn’t know at the time was that in his own way he was helping me too, in a different way) 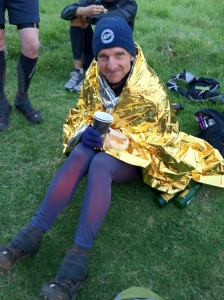 A sad, pathetic (but jubilant) quivering wreck having knocked off the Hillary Trail in 11hrs 55mins and raised $5,000 for a great cause.

And it just so happens that the ‘friend in need’ was me at the end of my Hillary Trail PB attempt. I was a wreck. I’d pushed myself really hard to break the 12-hour barrier and raise as much money as possible for the Mental Health Foundation as part of our CoastPathRun project. I made it (just!) but very shortly after finishing my body went into meltdown and I was a quivering, shivering wreck. Brendan took charge and looked after me for the best part of an hour, getting me warm, forcing food & drink down me, offering encouragement and kind words just when they were needed. He even gave me his favourite pair of tights to wear!

So yes Brendan (and any other of my other trail buddies) I will put up my hand to help you whenever you need it. Thanks.

4 Responses to All for one, One for all