Blog no.1 in a series about the epic running odyssey that was CoastPathRun

“Only those who dare to go too far will ever know how far they can go”. 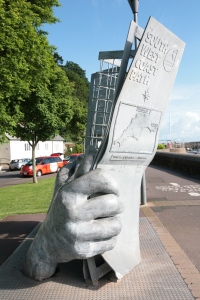 I can’t remember the source of this quote now but it was very much in my mind in the days leading up to the start. And there were certainly many times during the 17 days that it eventually took to traverse the 1,014kms of unrelenting hills that make up South West Coast Path from Minehead to South Haven Point – the UK’s longest National Trail – when I thought I’d dared to go too far.

I never expected it to be easy – if I’d thought it would be I wouldn’t have bothered taking on the challenge – but the reality was way harder than anything I’d truly expected. It came within a whisker of breaking me on numerous occasions, so the satisfaction that comes from being able to sit here writing about it, knowing that I have ‘knocked it off’ 4 days faster than anyone has ever done it ever before, is immense.

That joy is tempered by just one thing – regret that my running partner, Tom Bland, could not make it all the way through with me. For this was first and foremost Tom’s dream. It was his idea, his planning and his local knowledge that got us to the start line. Without him I’d have been a non-starter and I know how hard it must have been for him to watch from the sidelines as I continued on without him when, after days of heroic struggling, he made the only sensible decision he could and sought medical advise rather than pushing on through the pain for any longer. That he was there at the finish to welcome me speaks volumes about the wonderful human spirit that powers the man that helped make my part of the dream possible. So before this story goes any further I have to say a massive THANK YOU to Tom. I’m so proud of you mate – you are nothing other than a “damn good bloke”.

1,014 kms is a ridiculously long way to travel on foot, especially over terrain as demanding as the South West Coast Path with its torturous succession of climbs and descents. Beforehand, seen through the lens of my eternal optimism, our goal of completing the distance in 2 weeks had all seemed entirely possible. In hindsight it now seems little short of total lunacy, especially given the weather, for we had inadvertently chosen the worst June in over one hundred years to attempt what had never previously been done by anyone in less than 3 weeks.

There is a long story to tell and I will attempt to tell it to the best of my ability, but the details are hard to come by for so much passed in a blur. Days, trails, hills, beaches, headlands, cliffs, villages, support stops, youth hostels, all merge in a fog of sleep-deprived making. Exhaustion was the constant enemy and it too robbed me of much of the fine print. Frequently, late in the day, after hour upon hour of slow but relentless progress towards the ultimate goal, we’d meet someone on the trail who’d ask “where have you come from today?” All too often I couldn’t even remember where that was! Or I’d get it wrong, confusing today with yesterday. After 10 days or so of early rising, late finishing, too little sleep, and countless hundreds of thousands of footsteps, I started to feel like I’d been on the Coast Path all my life. Time before CoastPathRun had ceased to exist and yet the finish – the only future I could contemplate – still seemed impossibly far away. I struggled at times to verbalise the most basic thoughts or even express my most basic needs (what food, fluid and pain relief I required). So my memory of what happened out there is far from perfect but I’ll do my best and hope it’s good enough to impart at least a flavour of what was, in hindsight at least, a massively rewarding and enjoyable adventure.

I have decided, with deference to the attention span of the majority, to break the story into chunks, each of which will be the subject of a single blog. I’ll do my utmost to roll these out in quick succession. If you’d like to receive these blogs by email you can do so by signing up here. After submitting your details you will receive an email from Google Feedburner asking you to validate your email address etc. This often seems to end up in junk mailboxes so if you don’t get one almost immediately please check your junk folder.

THANKS for all the support,

This entry was posted in Uncategorized. Bookmark the permalink.