Blog no.2 in a series about the epic running odyssey that was CoastPathRun 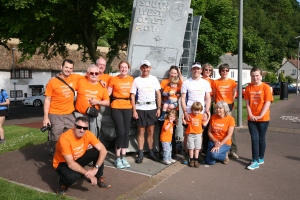 The start at Minehead – a great sendoff from loved ones

Our plan for the first three days was ambitious – 236 kms and 8,350m of vertical gain – but what better time to get in some big miles over big hills than when fresh?

Still just a few days off the plane from California, where I’d stopped en route to run a marathon through the giant redwood forests south of San Francisco, my body clock was in disarray and sleep had been hard to come by. Starting this mission already dog tired wasn’t ideal but after a hearty Condemned Man’s Breakfast at our hotel in Porlock and a short drive by Spaceship to the start on the esplanade in Minehead, I was feeling relaxed and eager to get going. We got a great sendoff from family and friends, including both my sisters (one of whom had come all the way from California to be there).

It was a little surreal chasing Tom’s 4-year old son Finn down the seafront as we set off into the unknown. After a year of planning and preparing (much longer in Tom’s case) we were finally running it, not just talking about it. With us for the first stage to Porlock Weir were my nephew’s wife Sarah and Garry from Tom’s local running club. Garry’s name will reappear frequently as this story unfolds, along with that of Chris, another Axe Valley Running Club stalwart, both of whom lent tireless support to our campaign.

Just keep following the acorn symbol for a thousand kms or so & we’ll get there in the end!

I had only met Tom in person for the first time just 48 hours earlier and this was the first time we’d run together. Twenty years younger than me, with a very impressive triathlon CV (he was ranked 7th in UK at one point), I always knew he’d be the stronger and faster of the two of us. So I was relieved when the pace over the first few kilometres remained relaxed. That said, I’d done very little running in the last 3 weeks (apart from that one marathon the weekend before) and my body seemed slow to wake up. The first 20 kms were full of tweaks and groans that played on my mind for a while, but little by little these eased and I relaxed into things. The weather was looking good, the scenery was uplifting, the banter was lively and the trail was in great knick – what could be better? 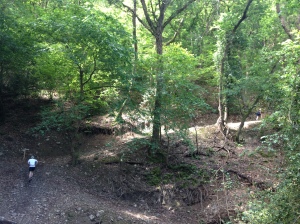 Hills & woods – very much the theme of the early stages

Much of the first day was spent running through classic English woodland, with the sound of the sea always close by. But it was seldom flat. We’d climb and drop, climb and drop, as we cut across the grain of the land and the deep valleys that spilled into the sea off Exmoor. This of course would be a constant theme of the entire journey and was why we’d tagged our running shirts with the line “1,014 kms of ups and downs for Mental Health”. We fully anticipated those ups and downs to be mental and emotional as well as physical, but for the time being at least they remained very much the latter.

Some 6 hours in we brought up the first marathon of the run. I stopped to take a quick video, thinking it’d be great to record our thoughts and feelings every 42.2 kms along the way. Ha! That was the first and last time that we managed to do it as very soon the weather was to start conspiring against us, and the mental arithmetic required became too arduous for our addled brains.

Late in the afternoon we passed over the Great Hangman, the highest point on the Coast Path at 318m. We joked about it being “all downhill from here” and pushed on towards our end-of-day goal, Ilfracombe. By now I had well and truly got into my stride, was feeling strong and full of energy, my confidence building. We’d enjoyed a stunning variety of vistas and trail conditions and ran down the final hill to meet Phil & Sheila (The A-Team Support Crew), soak our legs in the cool waters of the harbour and dine ‘al fresco’ in the car park on fish & chips. One day down and all was well. It had been a great start and morale was high. 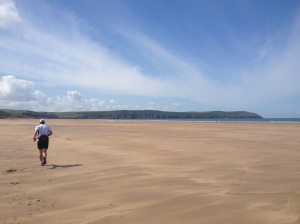 Tom takes off across Woolacombe Sand

Day 2 gave Tom & I our first chance to run just as a pair and we got to know each other a little better as we headed south in sunshine along the crumpled coast of North Devon. At Woolacombe Sand we had our first soft sand beach run, before climbing up and around the wonderfully named Baggy Point.

We’re both hill lovers and were quietly dreading the only extended section of flat running that awaited us at the mouth of the River Taw. But soon enough we were there, running first on a stop bank and then on the smooth tarmac surface of an old railway line. I loathe tarmac and know from painful experience that my body soon rebels if the rhythm of the run isn’t broken up from time to time by a hill (there weren’t any), an uneven surface (there weren’t any) or a walk. So we knocked off some 30 kms, around two large estuaries and through the towns of Barnstaple and Bideford, following a ‘run 10 mins, walk 2 mins’ routine. While running we stuck to a 6-6.5 min/km pace which seemed pedestrian at the time, but was probably the only time during the entire quest that we got close to doing 10 kms in an hour. A week later, battered and exhausted, we’d have considered this to be lightning fast progress.

Towards the end of the day we were relieved to get back on to some single track but now it had starting raining and mud was becoming our new enemy. The final few kms of the day skirted a golf course. A low fence, unseen through its camouflage covering of vegetation, took me out at the knees. Then the heavens opened and we had a stiff headwind to contend with, but at least there were no golf balls threatening to take us out. 11 hours after starting out we’d clocked up 75 kms and were sitting safe and relieved in Westward Ho! (the only place name I know of to use an exclamation mark in it’s name – shame, there should be more).

Looking at it now on the map, and considering what we’d already done, the next day’s run seems rather infeasible. It was always going to be one of the toughest days of all, but the 79 kms and 3,600m of climb that we covered over 14.5 hours was brutal. It was to be the warmest day we encountered too and the battle to remain sufficiently hydrated added to the challenge.

From the outset we were taking on a relentless series of climbs and descents as we worked our way around Bideford Bay, through the village of Clovelly and out to Hartland Point. This marked the point at which the open Atlantic Ocean took over from the slightly more protected waters of the Bristol Channel and the landscapes beyond felt wilder, the sea more primal, the physical battle that much more demanding. On we went, climbing over the next headland and dropping into the next improbably steep-sided valley, reuniting with Phil, Sheila and the Spaceships every couple of hours to take a break, pig out, replenish fluids and get some much-appreciated TLC.

Spaceships – the ideal support vehicles for the mission

I was becoming increasingly aware of Tom’s greater strength on the hills and my fear of dragging the chain, holding him up, was growing each time I saw him pull away from me. At times I’d be at the top of a descent and look down to see Tom already starting up the next climb. He seemed to be moving at a pace that was well within himself but I knew I’d blow up if I tried to match it. As a result we weren’t spending a lot of time together as a pair and I also started to fear for our team unity. But I kept all this to myself and tried to focus on plodding it out one step at a time.

Well into the evening, after we’d been at it for some 12 hours, we dropped down to Widemouth Sand and had to work our way through some soft sand at the back of the dunes. Out of nowhere my right achilles started to ache quite badly and I feared for the possible consequences. This made it even harder for me to keep up with Tom, and my morale started to plummet for the first time. 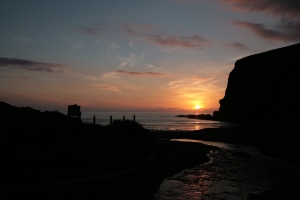 The sun sets half an hour before we reach Crackington Haven

At the top of the next hill we met up with the support crew for the last mobile aid station of the day. The finish was now just 8 kms distant, a mere 1.5 hours away, or so we thought. In fading light we kept going, thinking Crackington Haven was just over the next hill, but there was always another ludicrously steep rise in the way… then another… then another. It was more than 2 hours later, with the sun well below the horizon, that we finally dropped down off the last headland and into the waiting Spaceships.

We were exhausted, I was very concerned about my achilles, and we still had to drive to Boscastle YHA to find our beds for the night . It was gone 11pm when we got there. Phil heroically cooked up a stir-fry but Tom decided to skip dinner and head straight to bed. This was to prove a decision he’d regret and was partly responsible for the wheels on our wagon becoming decidedly wonky the next day. But that is the subject of the next installment… Read Part 3 by clicking here